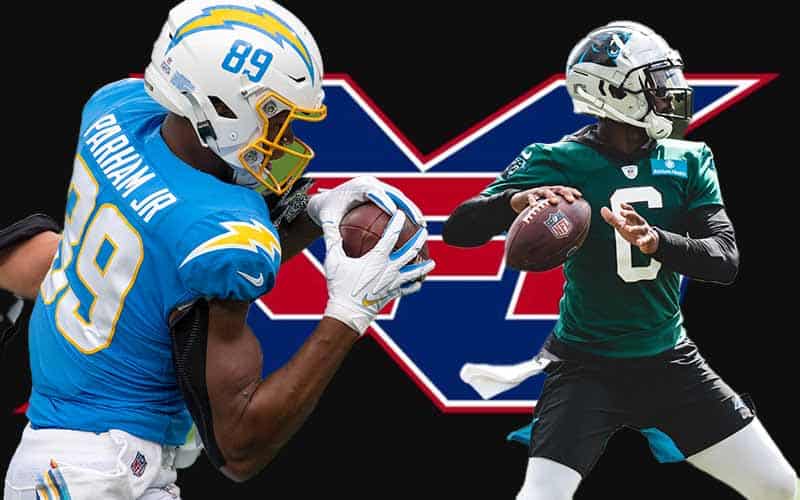 Although only given limited opportunities to contribute, former XFL talents PJ Walker and Donald Parham are making an impact at the NFL level when the opportunity presents itself.

PJ Walker was inarguably the single greatest player over the course of the abbreviated 5-week XFL season in 2020.

Anyone that bet on the Houston Roughnecks during 2020 was likely a winner, as Walker quarterbacked them to a perfect 5-0 record, amassing impressive video-game-like stats along the way.

He played like a combination of Allen Iverson and Russell Wilson, nimbly shifting about the offensive backfield with precise footwork and dropping accurate dimes to expecting receivers. Walker was electric, and it was no surprise that the Carolina Panthers came calling to secure his talents once the XFL folded.

Throughout the early part of the 2020-2021 NFL Season, Walker was relegated to third-string duty, but he worked his way up the depth chart and was ready for the call when injured starter Teddy Bridgewater was unable to play in week 11 against the Detroit Lions.

Walker struggled early, but was supported by a strong effort from the Panthers’ defense, as they went on to shut them out by a score of 20-0.

Although not as dazzling as his stats were in the XFL, Walker still got the job done and earned his team the win. He did miss a wide-open touchdown pass that he simply overthrew, but finished with the following stat line.

Bridgewater returned to the starting QB role for Carolina the following week, but PJ has shown that he can be relied upon when his number is called.

The betting odds for the Dallas Renegades to win the XFL Championship were high just before the 2020 XFL season began, and that was largely due to the prior success of their head coach Bob Stoops.

One of the bright spots for the 2020 Renegades was tight end Donald Parham. His 6’8”, 237-pound frame makes him a large target that was utilized often in the red zone for Dallas.

The Los Angeles Chargers took notice of Parham and signed him to a 2-year contract worth $1.2 million. Although he has not yet become a heavily relied upon option in the Chargers offense, Parham has made an impact, reeling in a few memorable touchdown grabs so far this season.

He has 5 catches for 75 yards with 2 touchdowns this year, but had another game-winning touchdown called back after replay in week 8 against the Las Vegas Raiders.

While Donald Parham doesn’t appear to be a threat to break 1,000 yards any time soon, he has become a consistent part of the Chargers goal-line package and could be developing a blossoming relationship with rookie QB Justin Herbert.

Parham and Walker’s development as NFL talents will only further enhance the XFL as a legitimate professional football league and heighten its chances of success for its 2022 relaunch.

Online sportsbooks taking bets on XFL games warmed up to the product, as did several broadcast networks. Now that the NFL is adopting players from their talent pool, it seems that the XFL was a good idea after all, and deserves a third shot at earning a place in the hearts of football fans across America.