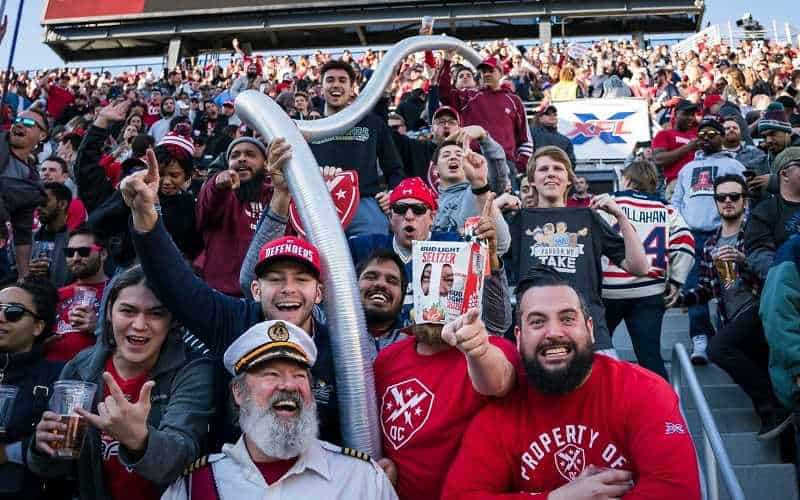 With the new XFL completing its fifth week of gridiron action, is it on the way to becoming a permanent addition to our spring sports calendar, or will this become another failed experiment of a league?

A significant issue for the XFL is television ratings. Viewership averaged over 2 million during the first week of games but has steadily declined since then. The television product is split up amongst ABC, FOX, ESPN, and FOX Sports 1. Sports Business is reporting that the ratings for the two Week 5 games that aired on cable networks ESPN and FS1 averaged under one million viewers for the entire running time.

The television ratings, although lower than the XFL would like, are acceptable for a new league and represent a good starting base to launch a new sports entity with. Will Alpha Entertainment and Vince McMahon have the determination to stand behind the league for several years while it develops a following?

Another negative indicator is the fact that the XFL has run nearly unopposed thus far, with no major professional sports threatening them for the attention of potential viewers. With March Madness and Major League Baseball about to begin, the competition for viewership is about to intensify. Another significant slip in the ratings and the XFL could be in real trouble.

On the positive side, game attendance is better than expected, with XFL teams Seattle and St. Louis embracing the product and accepting the Dragons and BattleHawks as a legitimate part of their sports landscape. The St. Louis BattleHawks have had to open up the upper deck to allow for more fans to purchase tickets. They’ve been starved for football since the NFL’s Rams left town for Los Angeles in 2016.

Unfortunately, a concession worker at a Week 4 Seattle Dragons home game tested positive for the coronavirus. Due to more cases appearing in the state of Washington, NBC Sports is reporting that Governor Jay Inslee is considering the passing of a ban on gatherings of more than 250 people, leaving the Seattle Dragons scrambling for options for this weekend’s home game against the Los Angeles Wildcats. A final decision on the ban is expected to be announced by the governor on Wednesday, and the Dragons are making preparations to play a game with no fans in attendance and with a minimal television production staff presence.

On the bright side, the fans in attendance seem to be developing a cult-like fandom of the product. During last weekend’s game in DC, fans in the endzone constructed a beer cup snake created using empty plastic cups. The progress of the snake’s construction proved to be more entertaining than the game itself as fans threatened to extend it from the field to the bottom of the scoreboard. You can bet on the DC Defenders’ fans to make the beer cup snake a part of their tradition.

If the ratings continue to plunge during the last half of the season, then it could be difficult for networks to retain their enthusiasm for the XFL in Season 2. Moving the product to a lower broadcast profile could work, but it may not be satisfactory to league financiers and co-sponsors. We’re betting on the XFL to last for a few seasons, but the league has yet to find its niche. It could die trying.

We’re hoping the XFL bets on its future and rides out this development period.