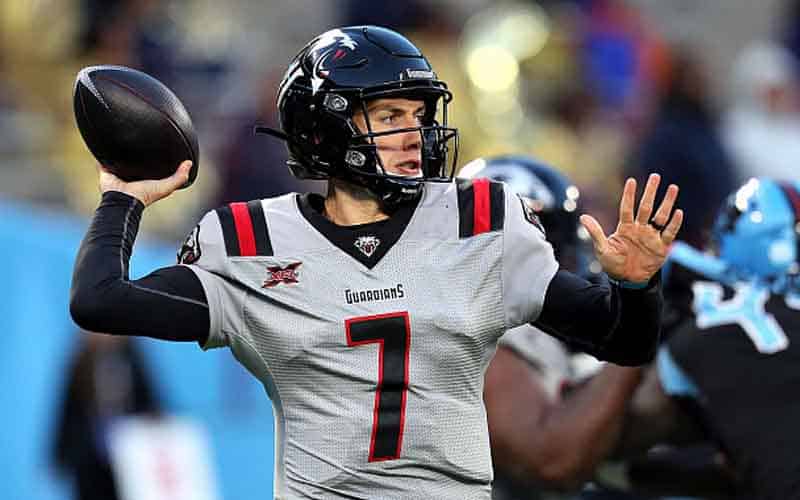 The Houston Roughnecks are the only consistent so far in the 2020 XFL. Houston is the only remaining unbeaten team, and they are running away with the Western Conference. Betting on the XFL outside of Houston has been a struggle, as the rest of the teams are pulling toward the middle and refuse to distinguish themselves as quality you can count on. That, or they’re straight-up lousy teams where defeat is a certainty.

With all that said, let’s have a look at the Week 5 results and try to make some sense of the standings.

The Houston Roughnecks continue their winning streak as they defeat the Seattle Dragons and take their record to 5-0. Although MVP odds have not been released, we’re certain that Houston quarterback PJ Walker will be a huge favorite to win. PJ and wide receiver Cam Philips connected for another big game with stats that resemble video game numbers. Philips would be a close 2nd in the XFL MVP race if it weren’t for PJ throwing him the ball.

Betting on Seattle is difficult because Jim Zorn and the Dragons are painfully mediocre. They aren’t weak enough to roll over and die, but they aren’t strong enough to take control of a game and squash an opponent. The Houston defense is still giving up yards in chunks, allowing all opponents to stay in games longer than they should.

On the final play of the game, PJ Walker goofed and took a knee on fourth down with 2 seconds left on the clock. This should have allowed the Dragons one last shot at the endzone and a chance to tie the game since new XFL rules allow for a three-point attempt after touchdowns. Instead, the referees erroneously ended the game (underscoring the XFL’s established issue with poor officiating league-wide). NBC Sports reports that the XFL took the blame for the blown call. Still, it’s nice to see transparency with league rulings, and the NFL should take note.

Just last week, we were ready to declare the Dallas Renegades the third-best team in the league. We thought they were drawing a cupcake of an opponent in the New York Guardians, but boy were we wrong. It would seem that new Guardians quarterback Luis Perez is serving as a much-needed stopgap, as they’ve righted the ship and are now sitting in a 3-way tie for first place in the XFL’s Eastern Conference.

The game went as expected through halftime with a 6-6 tie, threatening to lose in a bland-off with a bowl of KFC’s mashed potatoes. After halftime, two things happened: The Guardians began scoring, and the Defenders did not. Bob Stoops and the Renegades will be looking to rebound next week as they travel to play the DC Defenders. They are now tied for second place in the West with the Wildcats, both with 2-3 records. Bet on the Guardians to give the Roughnecks a good game next weekend as they try to prove that they are a real contender.

The St. Louis BattleHawks entered the game with a chance to establish dominance in the eastern conference and separate themselves from the pack. After the game, they found themselves without an answer on offense and in a three-way tie for first place in the East with the Guardians and the DC Defenders.

The BattleHawks’ rushing attack seemed to be working, but the overall offensive performance was too vanilla. Combine that with weak special teams play, and St. Louis was only able to muster six points. DC wasn’t much better, but they stayed steady with their basic offense and continued to chip away at the scoreboard and the clock.

Things looked bad early for DC, with quarterback Cardale Jones throwing an interception, but their fortunes changed when they inserted backup quarterback Tyree Jackson into the game. Jackson’s large-bodied presence made the difference on several short-yardage running plays, and he seems to have earned the starting job going forth. Jackson has a chance to solidify his starter status if he can take care of the Renegades next weekend. The BattleHawks will try to re-establish their winning ways when they visit the Tampa Bay Vipers, a team that is desperate for a win.

We blew this one last week when we said that the Vipers would not only cover but win the game. Tampa Bay provided the offensive explosion that we expected, but the Los Angeles Wildcats proved us wrong and scored a ton of points without their leading receiver, Nelson Spruce, who missed his second game in a row.

What makes it more confusing is the Wildcats were able to score 41 points with only 57 total rushing yards. LA Wildcats QB Josh Johnson has put the team on his shoulders and is yoking the ball downfield with authority. After a narrow defeat to the Guardians in Week 4, Johnson wanted to prove that LA is a contender, and he has accomplished that. LA is now tied with the Dallas Renegades for second place in the division, and they are poised for a playoff push.

The Wildcats travel to Seattle to play the Dragons next weekend in hopes of continuing their winning ways and climbing up the Western Conference standings. The Vipers host the BattleHawks in a must-win situation. Another loss for the Vipers and they can slither back underground until next spring.