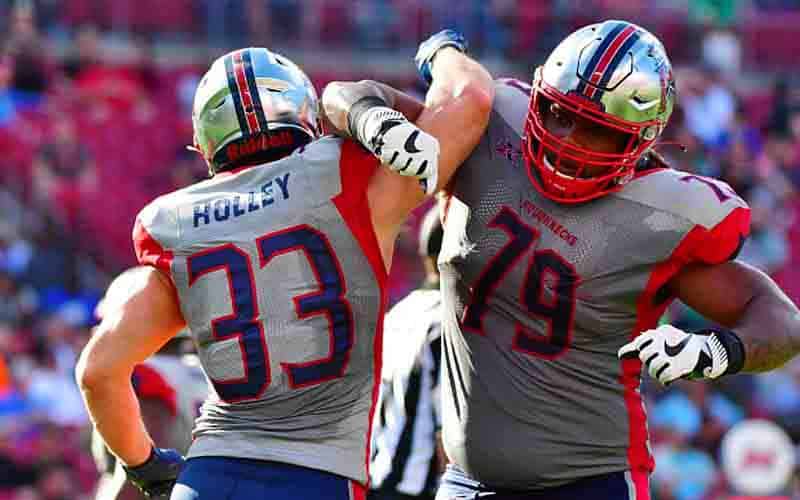 As we enter the fifth week of the XFL football season, the Houston Roughnecks and St. Louis BattleHawks are at the top of their respective conferences and separating from the pack. With both teams positioned favorably to win their conference, that leaves only two playoff spots left, and who attains those is anyone’s guess, as even the worst teams in the league are still far from mathematically eliminated from contention.

It is still no easy task to bet on the XFL. With teams shifting identities on a weekly basis, last week’s favorite is this week’s dog. That’s why potential bettors need to check back in often for the latest XFL developments because our weekly betting preview will prepare you for a weekend of wagering action.

June Jones’ Houston Roughnecks are a heavy favorite, and although their defense continues to give up a substantial amount of points, their offense is still maintaining their high level of output and dusting opponents to the finish line.

The Seattle Dragons offense can put points on the board, but their output has a cap because their strategy is extremely vanilla. They’ve scored 19, 17, 12, and 16 points in the first four weeks, and it would seem that perhaps the personnel is outperforming the coaching.

Expect the Dragons to get clicking on offense soon and start putting more points on the scoreboard, but it won’t help this week, so bet on the Roughnecks to roll and cover the spread. Stay away from the over/under. We lean toward the under, but those darn Dragons are due for a little fire.

Although not terribly impressive overall, the Dallas Renegades are potentially the third-best team in the XFL. They find themselves even at 2-2 on the year, and the Guardians provide the perfect rebound opportunity to get their season back on track. Dallas will look for Philip Nelson to step in at quarterback as Dallas News is reporting that regular starter Landry Jones is expected to miss two weeks after reaggravating a knee injury in last week’s game against the  Roughnecks.

Betting on the New York Guardians is difficult because they’re not particularly good at any aspect of football. They are the kind of team that sticks around and can sneak a win if you don’t put them away. Guardians quarterback Luis Perez is the antithesis of Patrick Mahomes, but unlike previous starter Matt McGloin, he at least provides a stopgap at the position and keeps the game competitive. That said, even with a backup quarterback, we expect Dallas to cover easily, and we like the over.

The once-mighty DC Defenders have slipped over the last two games. Two weeks ago, many were hailing DC quarterback Cardale Jones as a leading MVP candidate after a 2-0 start, but a two-game slide has us questioning if the Defenders are any good at all. The positive for DC is that the league is still settling, so 2-2 still has them in a very good spot going forth, as they would make the playoffs as a wild card if the season ended today. The negative is that the St. Louis BattleHawks and their punishing running attack are coming to town.

The BattleHawks feature the most active rushing game in the XFL and consistently pound opponents into submission. They are a 5.5-point favorite, and we think they’ll easily cover because even though DC is at home, they cannot find an answer on offense right now. XFL coaches have seen something in the game film that has stifled the DC offense for two weeks in a row. Considering how infrequently DC has been scoring lately, we like the under in this one.

The loser of this game is likely out of contention to make the XFL playoffs. Both teams feature offenses that are starting to heat up, but a few untimely bad breaks have left both teams with a 1-3 record. The Los Angeles Vipers will once again be without their star wide receiver, Nelson Spruce. His absence last week against the Guardians created a visible void in their offense.

The Vipers are looking strong, coming off a Week 4 trouncing of the Defenders. We’re guessing oddsmakers are giving the typical three-point swing for home-field advantage because otherwise, we’re not sure why LA would be the favorite.  Expect the Vipers to score in the mid to high 20s with the Wildcats scoring around the mid-teens. If you bet on the Vipers to win and are looking for more action, then the over is a recommended wager, as well.