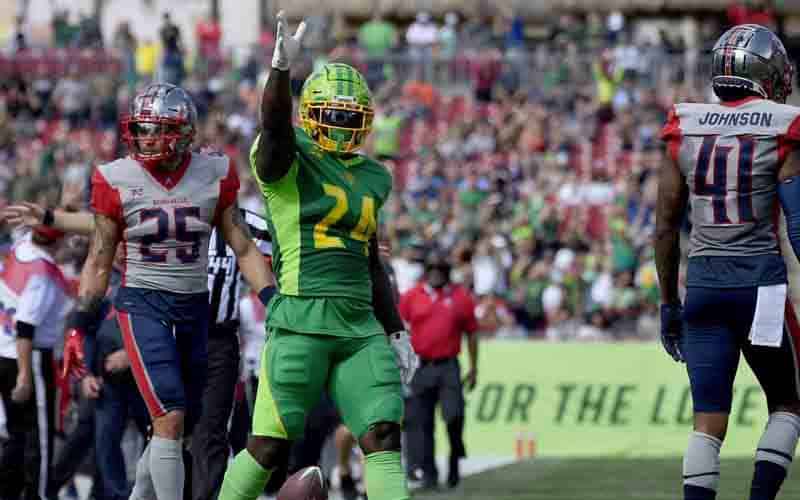 Carrying The Load: The Running Backs of the XFL

The sport of football is slowly turning its back on the running game and the running back position in general. The average career of a running back in the NFL is right around three years. The position rarely commands a high draft pick and is becoming increasingly expendable with each new season. Betting on XFL running backs to perform at a high level is a risky proposition.

A quick glance across the coaching staffs of XFL teams reflects one thing: passing offense innovation. The stat sheets through four weeks of action have mirrored that notion. The running game is not a basis for XFL offenses, save for the St. Louis BattleHawks.

BattleHawks head coach Jonathan Hayes entered the league as a bit of mystery. The bulk of his career was spent as the tight ends coach for the Cincinnati Bengals, where he served for 18 years under Marvin Lewis. Not enough evidence is available to determine his offensive coaching strategy of choice.

When the draft was complete, and the rosters were revealed, it became apparent that St. Louis was in possession of some heavy hitters at the running back position. Both Christine Michael and Matt Jones had previously seen NFL action and are imposing figures that can embarrass smaller defenders.

In Week 4, running back Keith Ford returned from injury and was able to contribute, adding further depth to the BattleHawks backfield. Quarterback Jordan Ta’amu has become an opportunistic runner in recent weeks, taking what the defense gives him and picking up the occasional first down.

The Belleview News-Democrat reports that Jones “wanted to come out and make a statement early that we could run the football.” One thing is for sure, you can bet the St. Louis BattleHawks will force defenses to be prepared to stop the run early and often because they’re loaded with talent and committed to smashmouth football.

Bob Stoops drafted two running backs with NFL experience and has leaned upon them as his Dallas Renegades have struggled to find consistency at the quarterback position. Not only have the two of them shared the load in the backfield, but they have both proven to be valuable commodities in the passing game.

Payne played for four years with the Carolina Panthers before finding himself out of the league and hungry for work. This is the case for many out of work running backs who are fully capable of playing at the professional level. Payne has excelled at every opportunity so far and is primed to punish defenders all the way to the XFL Championship.

Lance Dunbar spent several years with the Dallas Cowboys as a change of pace back. He has settled into that same role with the Renegades and has created a nasty one-two punch alongside Payne. The two of them have helped keep the Renegades’ heads above water while they sort out their offensive issues.

Dunbar and Payne are also the two leading receivers for Dallas if you need ‘em. When XFL teams face off against Dallas, you can bet the Renegades’ two leading running backs are going to be heavily involved in the game plan.

Head coach of the Tampa Bay Vipers Marc Trestman is an offensive innovator and uses ingenuity to create offense and points. He has no preference as to whether success is achieved via the pass or run. His plan is to exploit what is available to him.

Unfortunately for Tampa, that has only resulted in one victory so far, but their offense is now clicking and putting points on the board routinely. One aspect of the offense that they’ve been able to count on all season is the consistent play of De’Veon Smith and Jacques Patrick.

Trestman has been able to ride the hot hand so far, and he has been all aces, as neither Smith nor Patrick seems to cool off. They are the first and third leading rushers in the XFL. Bet on the Vipers to continue their surge and slither to the top of the XFL standings before the end of the season.