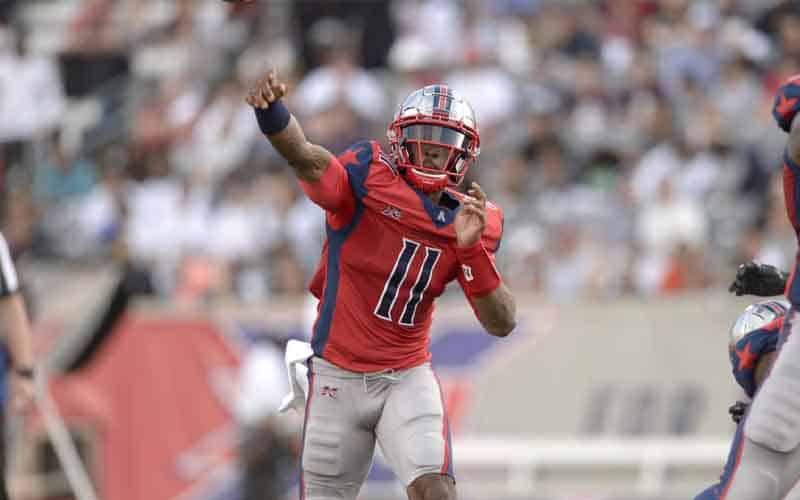 The XFL season got off to a great start. The ratings were solid, and fans seemed to enjoy the product. They were, on the whole, pleasantly surprised.

The sportsbooks, on the other hand, may have been less so.

With that in mind, let’s take a look at each game’s results and how the oddsmakers fared.

Most offshore sportsbooks only offered point spreads for Week 1, but we expect that straights and totals are on the horizon since the new XFL has had such a successful debut and bookmakers now have more context for the pacing and scoring of this decidedly different kind of football.

Either way, we’ve got you covered for any and all XFL betting info that you’ll need to beat the odds and take home a huge payout.

The DC Defenders won their debut game with a total team effort. Early in the second quarter, the Defenders blocked a punt and scored a touchdown to take a 9-6 lead. Two second-half Cardale Jones touchdown passes kept DC ahead, and a late interception for a touchdown sealed the victory. Winning by 12, the Defenders were easily able to cover the spread, and they look to be the best team in the league at the moment.

Jones managed the game well and looked athletic in the pocket. while former Pittsburgh Steeler Eli Rogers had the most impressive showing on offense with six catches on six targets for 73 yards.

Nevertheless, the Seattle Dragons managed to hang close until late. Receiver Austin Proehl had an impressive showing, hauling in five receptions on ten targets for 88 yards and two touchdowns. Unfortunately, the Defenders were able to cover the 7.5 points because of a game-sealing interception that came on a pass intended for Austin.

Los Angeles Wildcats starting quarterback Josh Johnson suffered a thigh injury and was unable to start week one versus the Houston Roughnecks. Enter Princeton alum Chad Kanoff, who went on to a mostly unspectacular day as the Wildcats were blown out by the Roughnecks, getting shut out in the second half.

Roughnecks quarterback PJ Walker was impressive, completing 23 of 39 passes for 272 yards, four touchdowns, and one interception. All four TDs were thrown to different receivers.  The Roughnecks were easily able to cover the 5.5 points.

Cam Philips was the leader of the pack for the Roughnecks, hauling in four receptions on nine targets for 67 yards and one touchdown. The Walker-to-Philips connection was established on the first Wildcats offensive drive of the game with a 50-yard touchdown pass.

Wildcats wide receiver Nelson Spruce had a quality outing in the loss with 11 receptions for 103 yards.  Otherwise, not much went right for Los Angeles. Their success may rest on the health of Josh Johnson, and Houston’s potential dominance is tempered only by the fact that they beat a backup on their first outing.

The Tampa Bay Vipers failed to live up to expectations in a game that was an uneventful struggle until a late defensive touchdown blew the score wide open. The Vipers were favored by two points but were ultimately sent slithering away by the Guardians.

The Vipes had some good performers, though. Running back De’Veon Smith ran for 79 yards on 16 carries, and wide receiver Daniel Williams had 123 yards on six receptions. Ultimately, Tampa Bay’s hopes were poisoned by two Aaron Jones interceptions that came during some of the deepest offensive penetration of the day by the Vipers offense.

The New York Guardians defended their home turf with a combination of efforts across the board. Matt McGloin led a balanced attack for New York, but the Defenders’ stingy defense with their three takeaways and five sacks proved to be the winning element. Clearly, the books and the betting public will revise their opinions of these new G-Men.

Before this game, I thought the point spread was alarmingly large for such a new league. Bob Stoops, head coach of the Dallas Renegades, has had loads of success in the college ranks and likely drove the spread to such a high number, but 10 points indicates a blowout at any level of professional football.

Also, prior to the game, I liked the makeup of the BattleHawks’ roster, as it features two bruising running backs with NFL experience.  Not knowing much about St. Louis Head Coach Jonathan Hayes and his philosophies, I predicted that they’d feature Matt Jones and Christine Michael as the first and second options.

Although Michael was ineffective, Matt Jones carried the ball 21 times for 85 yards and ended up being the difference in a low scoring slugfest. Coach Stoops and the Renegades will need to practice hard and get back on track if they’re going to win the XFL title as the preseason odds indicated, but as of right now, their futures aren’t looking so bright.

Our recommended sportsbooks have yet to post odds for any Week 2 games, but we’ll be keeping our eyes peeled and will continue to provide all the information and XFL news that you need for any betting action.