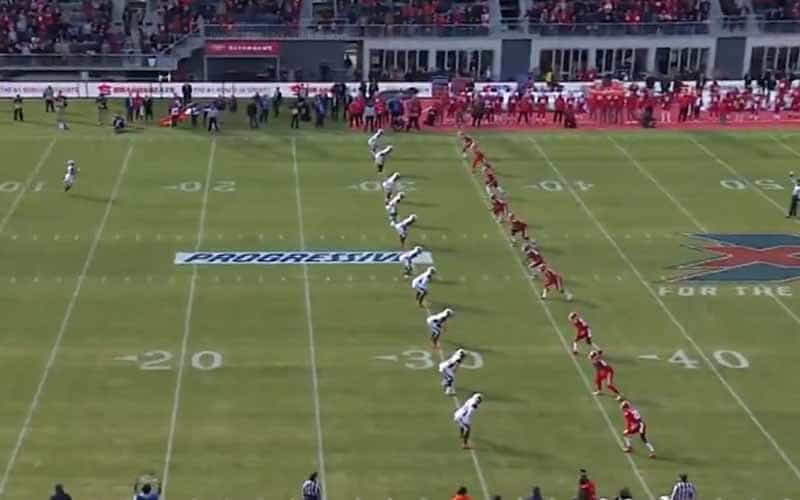 What Worked and What Didn’t in Week 1 of the XFL?

In 2001, the first attempt at the XFL didn’t go so well. It featured many procedures that seemed bizarre at the time, but the NFL and NCAA football actually adopted some of those XFL rules, and they’ve enhanced the television presentation of football as a result.

Other rules and policies didn’t go over well and were left behind with the old XFL. With Week 1 in the books, here’s what we thought about the new XFL and their latest attempt at a spring football league.

The XFL has completely revamped the kickoff process, and the NFL needs to adopt this strategy. Instead of kicking the ball to the opposing team and sending 11 madmen running full speed for 50 yards to collide with another human being, the XFL kickoff rules provide for less chaos and injury.

The kicker kicks off from the 30-yard line, and the ball must travel through the air and cannot be squibbed along the turf.  No onside kicks are allowed unless the kicking team declares that they are doing so.  The ball must land between the opposing 20-yard line and the end zone.

This scenario creates the opportunity for the return team to utilize an oddball blocking scheme, or the kicking team can employ a stunt. It will undoubtedly result in fewer injuries, and most importantly, it looks like football. Plus, there are hardly any touchbacks, which have lately become an irritating plague in the NFL.

Live Microphones on the Coaches

DC Defenders Head Coach Pep Hamilton and Seattle Dragons Head Coach Jim Zorn are not fans of their play calls being broadcast on live television. I can’t blame them. Their entire strategy and play-calling system are exposed for other teams to figure out and take advantage of.

Still, its fascinating to hear the communications coming from the coach’s headset. It provides unprecedented access and insight and can cause anxiety if the coach calls a play that a fan watching at home doesn’t agree with. One can only imagine what could be in store for the future — coach and player arguments, expletives, and if we’re really lucky, incompetent and questionable coaching we can all collectively rage at (and bet against!).

When the NFL season ends each February, football fans are faced with a six-month layover until they get to see another snap. Football-only fans and bettors must divert their attention elsewhere each weekend. Not anymore.

The XFL could have easily adopted the NFL’s formula of playing most of their games concurrently on the same day. Instead, they split the schedule up, placing two games apiece on Saturday and Sunday, with no games running simultaneously.

The XFL schedule accomplished two favorable results. The first is that the broadcasts take the place of both college and professional football, filling up the entire weekend for football fanatics. The second is that all games are available to the public, and no subscription or satellite package is required.

The XFL is a betting friendly league and has infused betting lines and other wagering information into their broadcasts. The season is only one week old, but the inclusion of XFL betting odds has been unobtrusive thus far and almost unnoticeable unless you are looking for it.

The league treats its viewers like adults and acknowledges the betting element that is involved in the game. It is refreshing to see transparency when other sports leagues are sticking their heads in the sand. With odds presented next to team names on the scorecard, it won’t be long before people unfamiliar with sports gambling will begin to ask questions and generate more interest in betting on the XFL.

With any new league, it will be difficult at first to assess what players will be starters, and what kind of coaching strategies will be employed for each team. Finding injury reports or XFL player statuses before Week 1 was not easy, causing many fans to start players in DFS lineups when they didn’t even suit up for the game.

The best resource we’ve found for XFL player information is behind a pay wall and thus useless to most of the betting public. The unavailability of player information could be a result of careful league messaging or the deliberate suffocating of data on the XFL’s part (though the latter seems unlikely).  Either way, this is much different from the NFL policy of optimum transparency.

You’d think a league that allows audio of coaches’ play calls to be broadcasted on live television would be a little more press-friendly. There’s no such thing as bad publicity, after all. But that hasn’t been the case yet.

In Week 1 of the XFL season, the Los Angeles Wildcats lost to the Houston Roughnecks by a score of 37-17. Their defensive coordinator, 2-time Super Bowl Champion Pepper Johnson, was fired after the game. Also released following the game was linebacker Anthony Johnson, the Wildcats defensive captain.

Head Coach Winston Moss made a brief statement regarding the termination of Coach Johnson following the game, but no mention has been made of Anthony Johnson’s release. It’s now Friday, and Anthony Johnson is still off the radar. He has yet to be picked up by another XFL team.

Imagine if a defensive coordinator and a defensive captain were released after the first game in the NFL. Reporters would be camped outside of their homes, and press conferences would be flooding with questions regarding this situation. Outside of declaring himself a free agent on Twitter, Anthony Johnson has not made another mention of this situation.

Does XFL owner Vince McMahon have the league’s flow of information locked up tight? Is the Anthony Johnson situation due to off-field issues protected by confidentiality agreements, or is it the subject of an ongoing investigation? Or is interest in the XFL simply not high enough yet for the mainstream football press to demand more information?

It is now Week 2 of the XFL football season, and there are currently no major fantasy outlets offering leagues or hosting. The same cannot be said for DFS, as both DraftKings and FanDuel have partnered with the XFL to offer DFS games (i.e. single game fantasy events rather than season-long leagues).

McMahon owns a stake in DraftKings and has designated them as the official fantasy site of the XFL. Although traditional fantasy football options have been mentioned by DraftKings, nothing has shown up so far. Fantasy leagues are typically organized prior to the beginning of the season, so perhaps that ship has sailed for 2020.