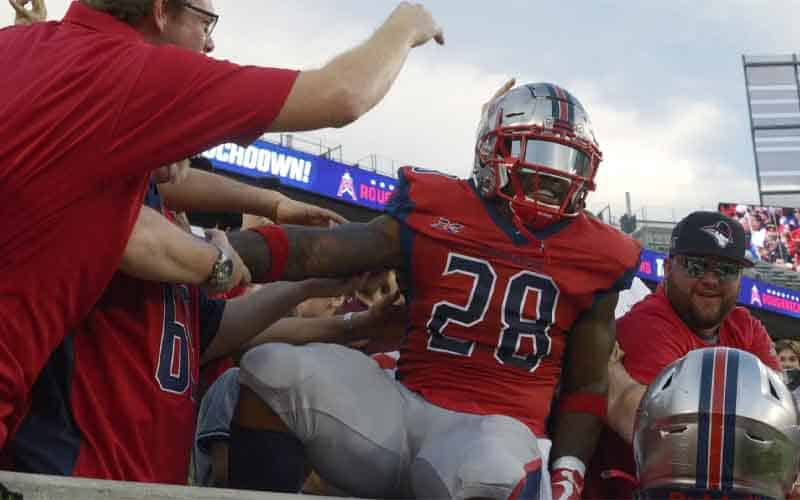 The dust has settled after two weeks of XFL football, and only two teams remain unbeaten, the DC Defenders and the Houston Roughnecks. Viewers are settling in with the new XFL rules, and the competition is heating up. Here we have a look at the results of each game and how they fared against the odds.

DC quarterback Cardale Jones had another solid outing as the Guardians struggled to build upon their week one performance. Jones completed 23 out of 37 passes for 276 yards and two touchdowns. He looked confident, not rushing anything and taking what the defense was giving.

The same cannot be said for Guardians quarterback Matt McGloin. He was ineffective passing, and his body language was not that of a leader. The in-game interviews were a riot, though. McGloin had a hard time facing questions immediately after throwing interceptions.

Speaking of the Guardians’ defense, they couldn’t withstand the sustained aerial attack from the Defenders. New York looked solid against the Tampa Bay Vipers in week one, only allowing three points, but they gave up two late scores against the Defenders, ending all hopes of a comeback.

The Defenders had no problem covering the 6.5-point spread. The under was the winning bet this week, as the final score fell well short of the mark due to the sputtering Guardians offense. No matchup is flirting with the over when one team puts no points on the board, after all. This weekend, the Guardians hit the road to face the St. Louis BattleHawks.

Betting on the DC Defenders going forth could be a good idea.  They are the current leader in the latest XFL championship odds at +190, and next week they head to Los Angeles to face the struggling LA Wildcats.

A great crowd was on-hand to witness the Tampa Bay Vipers and head coach Marc Trestman continue their struggles against Jim Zorn and the Seattle Dragons. The Vipers carried a nine-point lead into the second half, but the Jerry Glanville led defense couldn’t outlast Zorn’s offense. The Dragons scored 17 unanswered points to take the win at home.

It is still uncertain as to why oddsmakers had the Vipers favored after such a miserable week one performance. Expect to see less favorable odds for them in week three against the Houston Roughnecks. You should heavily consider the under next week if you are thinking about betting on the Tampa Bay Vipers.

The Dragons were able to cover, and, since it was such a defensive struggle throughout, the two teams came nowhere near the over. Seattle hopes to carry their good mojo into next week when Bob Stoops and the Dallas Renegades come to town.

This game was a bit of a snoozer, with both teams knotted up (and nodding off) at halftime with a score of 3-3. The low attendance didn’t help, as cameras struggled to find angles that featured decent chunks of fans (despite an overall increase in XFL attendance compared to Week 1). Fortunately, the action picked up in the second half when Renegades quarterback Landry Jones finally got the aerial attack working.

The passing game also opened things up for Dallas running back Cameron Artis-Payne, who finished with two touchdowns and 99 yards on 14 carries. The offense is finally living up to the pre-season hype that Bob Stoops created.

On the flip side, the Wildcats are struggling across the board, but there have been some bright spots. Nelson Spruce has been a beast thus far, hauling in a league-leading 192 receiving yards and three touchdowns over two games.

The Renegades were able to cover and will likely be favored again in week three when they visit the Seattle Dragons. The path doesn’t get any easier for the Wildcats with the 2-0 DC Defenders coming into their den this weekend.

Week 2 of the XFL finished strong with this barnburner on Sunday night. The St. Louis BattleHawks proved that their Week 1 performance was no fluke and beat the huge spread vs. the 2-0 Houston Roughnecks.

Houston quarterback PJ Walker was once again electric, looking like a human highlight reel on nearly every play. Walker and DC Defenders QB Cardale Jones are the two best players in the XFL at the moment and should be atop anyone’s MVP predictions. They might also be one-and-done in the new league if the NFL is paying attention.

NBC Sports reports that PJ found a home with the Roughnecks because of a recommendation from former Indianapolis Colts quarterback Andrew Luck. Luck became familiar with PJ when he spent some time in Indianapolis as his backup. Houston has been thrilled with the recommendation so far. Incidentally, Andrew’s father, Oliver Luck, is the current commissioner of the XFL. Small world.

On defense, Houston was prepared for the BattleHawks’ running game. The Roughnecks were able to shut down the combination of Matt Jones and Christine Michael, but St. Louis quarterback Jordan Ta’amu stepped up and had a solid performance to keep it close.

Unfortunately, there was a missed offsides penalty late in the game that would have nullified a BattleHawks’ interception. Ta’amu thought he had a free play, but the referee didn’t see that the defender was across the line when the ball was snapped. Hopefully, the XFL can tighten up such officiating lapses going forward. After all, if fans wanted blown calls, there’s already a league full of those.

This weekend, the BattleHawks host the New York Guardians, and 28,000 tickets have sold so far. It’s the first time there has been professional football in The Dome at America’s Center since the Rams left in 2015. Meanwhile, the Roughnecks will travel to Tampa Bay to face the Vipers as 6.5-point favorites. At this early juncture in the season, that’s as big a lock as you’re likely to find at any XFL betting site.