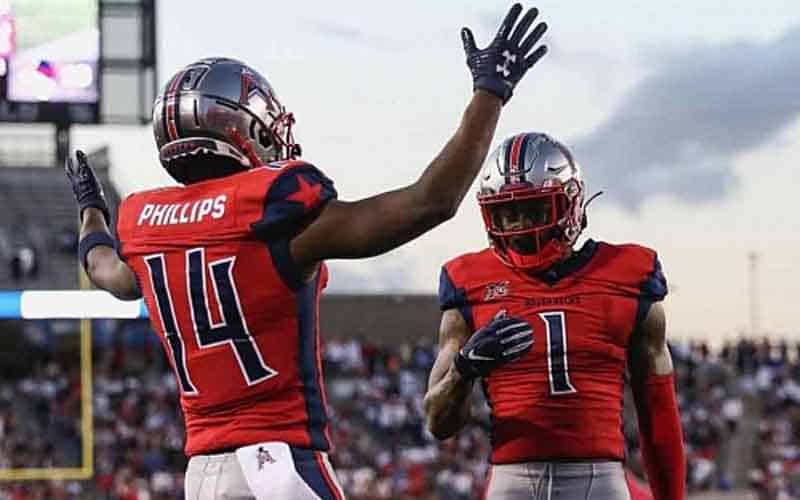 The Houston Roughnecks stand alone atop the XFL standings with a 3-0 record and an explosive offense that is becoming must-see TV. The DC Defenders took a step back after a poor performance by quarterback Cardale Jones, allowing for the Los Angeles Wildcats to climb out of the cellar and get a win.

Tampa Bay showed signs of life but couldn’t score enough to get it done against Houston. The BattleHawks showed that they have what it takes to make a run in the postseason. Betting on the XFL requires paying close attention to the burgeoning league, and we’ve got your Week 4 preview below.

The Wildcats destroyed DC last weekend to earn their first victory of the year. It came just in time because now they are traveling to face the struggling New York Guardians to hopefully even up their record at 2-2.

The Guardians have not found an answer at the quarterback position. Elite Sports NY is reporting that QB Matt McGloin will miss this weekend’s game because of a thorax injury. Had McGloin been healthy, he would have certainly been replaced under center. Expect the Wildcats to roll and easily cover. There are many types of bets that you can place on the XFL, and the best bet for this game is taking the under. We don’t expect the Guardians to score over 10 points.

Betting on the Seattle Dragons is a risky proposition. They have some talented players, but they are just hopelessly mediocre and predictable. The St. Louis BattleHawks have earned the respect of oddsmakers and have been favored by double-digits in their last two games. We think St. Louis will cover again.

The BattleHawks are the only team in the XFL that has focused on the running game as a part of their offensive strategy. While every other team in the league has installed a pass-happy offense, St. Louis is grinding it out and allowing for their quarterback, Jordan Ta’amu, to gain confidence as a game manager. St. Louis is good now, but they will be dangerous come season’s end.

The only surprise about this weekend’s betting line is that the Houston Roughnecks are only favored by 2 points. The reason is that despite their explosive offensive efforts thus far, the defense has given up a lot of points through three games, and they nearly lost in a shootout with Tampa Bay last weekend.

Expect Houston to cover by several points. The Roughnecks are allowing a lot of points because teams are throwing the ball deep in an effort to play catchup on the scoreboard. Houston is comparable to the Kansas City Chiefs of the NFL. The offensive excellence more than outweighs any deficiencies presented by the defense.

The Renegades are starting to come around, but their pedestrian play at quarterback and their aimless strategies make it difficult to predict any outcome. Failure becomes an easy forecast when Dallas faces a juggernaut like Houston.

Cardale Jones and the DC Defenders look for a rebound performance after suffering an embarrassing loss to LA last weekend. Unfortunately, the Tampa Bay Vipers just had their first offensive explosion of the year last week and are starved for their first win of the season.  The odds reflect this scenario because DC would normally be a heavy favorite.

We like the Vipers to continue to build upon last week’s performance and to finally notch one in the win column. If DC plays anything like last weekend, the Vipers could end up blowing them out. Bet on the Tampa Bay Vipers in Week 4.

Below are the updated XFL championship odds provided by Bovada.